Script triggers are a great feature in FileMaker that allow you to initiate a script when certain actions occur such as committing a record or leaving a layout. Not only do they run when user initiated, they can also be script initiated by script steps. This can sometimes produce unexpected results and so you may wish for triggers to be disabled. This article presents a very simple and elegant method of suppressing script triggers from firing when initiated by other scripts.

EDIT: You always think of new things once the article is written, d'oh!

So after writing the entire article and then sitting down afterwards and having a little thing, it became apparent there is in fact a far more elegant solution that follows the same technique as in the article - but without the need for any variables of any type. It will make more sense as you read the article, but for the time being just note that you could simply pass Get ( ScriptName ) as the parameter to the script trigger and check for whether it is empty or non-empty as your test. Anyways onto the article...

Some conventions before we begin:

Because we are dealing with two types of scripts in this article, we will refer to triggered scripts as T. The main script that is executing will be called A.

The method we have used to this point

Suppressing script triggers is a common issue and one that has had solutions devised in the past which we have used. The conventional method involves setting a global variable at the beginning of script A as a means to tell other triggered scripts T that script A is executing and that they should halt their own execution immediately. 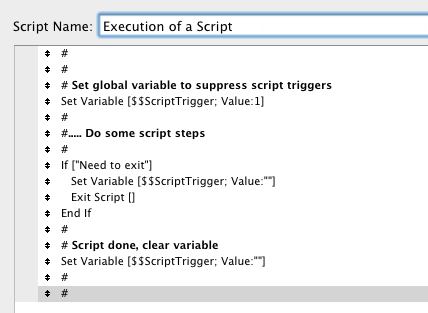 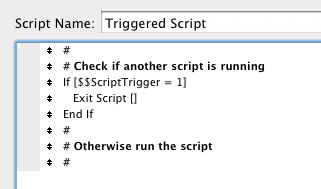 While this method works, it does require a fair amount of maintenance. Not only does the global script variable have to be set in A, but if there are any exit conditions later on in the script, it must be cleared otherwise the global variable will persist with its value when future scripts are run.

The thing about local variables

The Set Variable script step does not actually mention at any point that these are script variables, they are local variables.

Are there any other contexts in a FileMaker solution where we might be able to define a local variable? The answer is yes!

Defining a local variable outside of a script

How this translates into a method for script trigger suppression

So what do we know so far? We know that if we can set a local variable outside of a script, then this variable will exist only outside of scripts. Conversely we know that when a script is executing, the local variable is unavailable, and so if we try to obtain its value it will return a blank.

What if we define a local variable outside of a script and then pass it to the script T as a parameter. If T is user initiated then the parameter passed will be the value in the local variable.

Confused? Ok lets break it down....

In this article we are using 2 different examples of where we can place this calculation and have it evaluate outside of a script.

You could place an object on your startup layout (or a number of layouts) that contain this conditional formatting calculation. You need to make sure it is visible on the layout for it to evaluate.

The second possible location is within a custom menu name. If you have a menu item that is used in your custom menus then you can hide the definition of the local variable within the menu name as shown. Custom Menu names are evaluated when layouts load, refresh and when the menu is accessed.

NOTE: If you use a startup script, be careful because conditional formatting and custom menus are going to evaluate while the startup script is executing, and as such the variables defined will actually become script variables!

Part 2: Setting up your Script Triggers 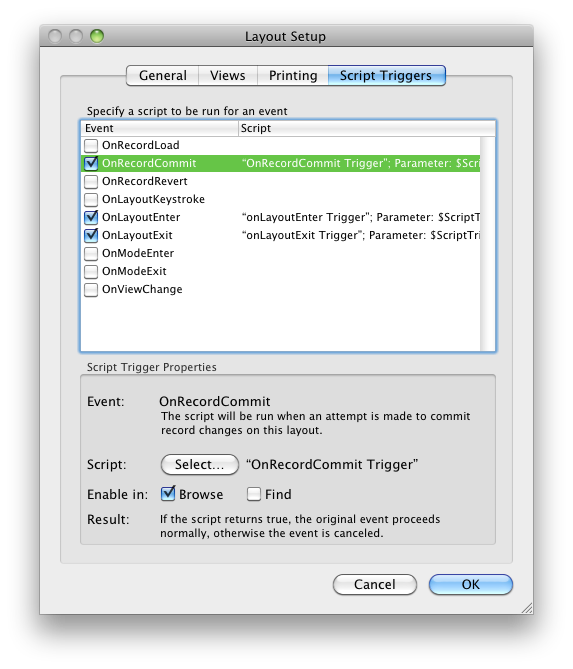 Each of the T scripts are being passed the local variable defined in Part 1 which we have called $ScriptTrigger. 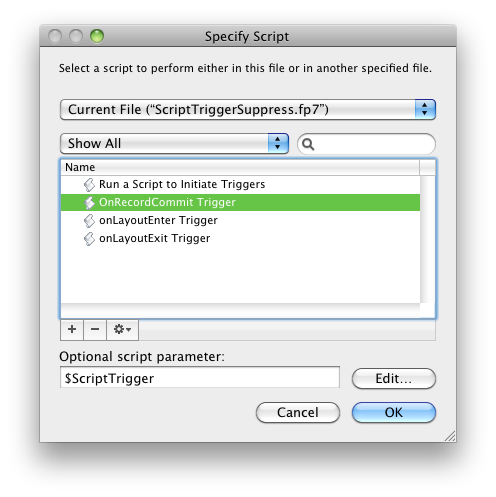 In the scripts we place a few lines of code to check the script parameter.

If however script A is executing and does something that causes T to trigger then when it tries to pass $ScriptTrigger it is going to pass a blank variable. Remember, $ScriptTrigger only exists outside of a scriptural context! The variable does not exist in script A.

If you are using the script debugger to try this out you may end up with differing results. With debugger enabled, the conditional formatting and custom menu calculations will actually evaluate at some point during the process so that $ScriptTrigger gets defined within the context of script A. This does not occur when the script debugger is disabled.

Some things to note, and other stuff..

This technique can very easily be reversed so that you can use script triggers in a way that they are initiated only from other scripts and not when they are user initiated - simply change the check at the beginning of the triggered scripts.

This technique should probably be accompanied by some documentation as to where you are defining your local variable outside of the script context and what the name of that variable is. You should probably also document the technique in the triggered scripts or parameters passed to them. If other developers come along in future and see a local variable being passed to a script, they may wonder what is going on, and could think it is an error and remove the variable!