By Craig Saunders and Stuart Woodhouse, 17 May 2017

We had a tonne of fun being a part of the Asia Pacific FileMaker Developer Days mini-conference held in Sydney last week. There were over 100 developers from around the region, many travelling in from as far away as Malaysia, Perth and New Zealand.

FileMaker Inc. brought in Andrew Paulsen, one of the key product architects on the FileMaker Pro team, and Brad Freitag, Vice President of Worldwide Sales. And of course the local Asia Pacific team were there with David Borgnis organising and MC'ing the whole event — thanks David!

From Digital Fusion we sent five staff, with four them involved in presentations — the fifth was there to hold placards up to encourage suitable audience reactions.

The conference coincided with the release of FileMaker 16 so we'll lay claim to leading the world in getting into some serious discussions of the new features.

A number of speakers noted that the 16 release is quite developer centric with features such as the new RESTful data API, new window controls and the new object inspector. Even so there's a lot of features that will affect users too — a lot of discussion was on how these things will help us build better user experiences into our FileMaker applications and make it easier to fit in to the world of web services smoothly.

Andrew spoke a lot about FM16 features and product direction, as well as two of the best sessions we've ever seen (including those "under the hood" sessions at DevCon) on performance optimisation — very informative and directly applicable to the work we're doing.

Brad covered some of the sales and marketing strategy that's driving FileMaker nowadays and it was interesting to see how they're comparing against some of the new comers in the space such as Google AppMaker. FileMaker is a far more mature product and doesn't require buy in to the Google realm. However having these new players in the field helps validate and grow general awareness of the need for rapid, robust business app development tools.

It's also very reassuring to hear how FMI recognise FileMaker as more of a software development platform than the simpler "desktop database" that it used to be.

Another highlight was developer Salvatore from Goya showing us how to send photos of objects off to an Amazon Artificial Intelligence service (using the API tools) which would then return the contents of the picture as text — send it a picture of a cup on a table and it'll come back with "Cup"; he sent off a photo of a glass of beer and it came back with "Glass of Orange Juice". He's one of the funniest developers we've heard and his ability to entertain while telling us about such a dry subject is gold. 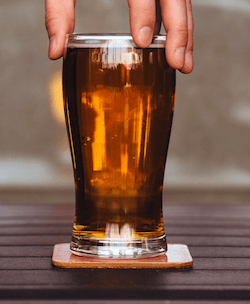 And to keep that theme running, we sponsored some drinks and food at the end of the first day to help spur the creative juices and socialisation amongst the FBA community that were present... if you weren't there you missed out on a free beer on DF so don't let that happen again will you?

The two days were targeted seprately to cater to two different audiences, with Monday being for FileMaker Business Alliance (FBA) members, and the Tuesday for all-comers such as "citizen" developers and non-FBA developers.

We were lucky enough to get four of our team onto the speaking schedule with... 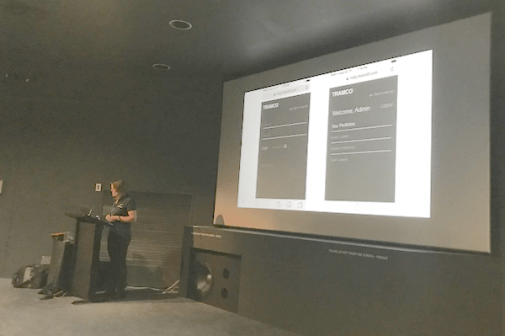 Not only was it a great experience for our team to be part of the conference, they thoroughly enjoyed being able to share their knowledge. I think it's a bit of a buzz to nail a presentation in front of a big audience... and these are knowledgeable peers with plenty of questions!

And what would a conference be without the company branded top plus obligatory photo (in this case we got the team mid-Conga):