FileMaker 19 is here and with it we see a bunch of incremental improvements and some nice new features... and the end of the major annual update!

As Claris modernise their approach, they’ve pledged to move to smaller more frequent updates throughout the year - more of a continuous improvement approach. We think this is brilliant, we’ll see fixes and improvements much more quickly.

This first new version since rebranding to Claris, has a new icon: after 30-odd years of folders, FileMaker now sports the new Claris logo as it’s app icon. And the "Advanced" part of the name has been dropped — it's just "FileMaker Pro" now whether using the Advanced tools or not.

So what is actually new in this version? Well it’s pretty much as planned and revealed at DevCon in August last year. To recap:

On iOS mobile devices we get access to some more of the device technology such as NFC reading to be able to react to things like RFIDs and Bluetooth devices plus access to the Machine Learning engine in all Apple devices (including Macs) and Siri Shortcuts, opening up the opportunity to enable voice control of our apps.

Perhaps most exciting and visible will be new “widgets” that we can add to your FileMaker solutions: it will now be possible, thanks to new JavaScript commands, to embed complex widgets such as Calendars, Kanban boards, Gantt Charts and other diagramming, drawing, annotation and visualisation tools right into FileMaker solutions.

While this stuff is new as a native feature, we have been doing this for over 12 years with our Reactor plugin. At this stage Reactor still offers a nicer more integrated way of achieving the same result, but Reactor doesn’t work with iOS or WebDirect, whereas the new JavaScript commands do.

Claris intend to make some of these widgets available in a further update coming soon via an “add-on” mechanism that will drop in ready-made controls, but for now they’re not available, however feel free to talk to us now as we have years of experience creating these interfaces in FileMaker.

We also move a big step closer to 100% compatiblity when using a web browser to access your apps — we can now use the card window (a sub-window within the main window you’re using) in WebDirect.

What that means in practice really is that we’re very close now to being able to use FileMaker solutions from a browser, with minimal changes. Which also means you can access your solution from any computer or device connected to the internet. And in businesses where you’re not allowed to install apps without jumping through hoops, you’re good to go without that worry.

Personally I still believe that for apps you use extensively, you’re better off having them installed as a standalone app... but at least with WebDirect giving very close to the same experience, you have the choice and it is certainly a boon for those times when you need that access.

At the very geeky end of the scale there’s a great new JSON command that makes it much easier for us to pull data out of FileMaker into JSON format — this will speed up certain development tasks and really represents further “opening up” of the platform.

JSON is very much the standard way that data is exchanged between applications (via APIs) and even within applications such as when synchonising data between a mobile app and a server when that mobile app has to be able to work offline.

For developers, FileMaker Pro now does “Dark Mode” on the Mac — since developers are allergic to sunlight this is a real boon. We can work with curtains drawn and at night, using dark mode to minimise the light cast from the screen, safe now in the knowledge that FileMaker won’t break the mood with a bright white blast from the script workspace or database definitions… 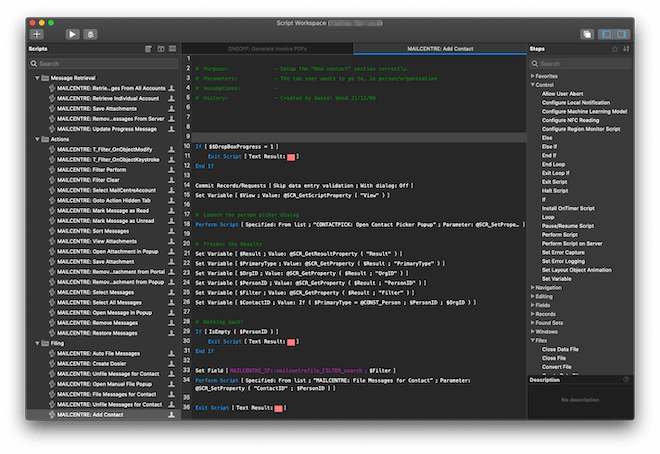 However to make a database itself, i.e. your app, have “dark mode” compatibility we still have to actually design dark layouts — we haven’t done it yet, but one possibility would be to have two versions of every layout, and navigate according to the system setting.

I can see this being particularly useful in some settings — for example with Aerial Toolbox’s helicopter flight record system it would make sense to use a light coloured background for daytime operations and switch to a ‘dark mode’ after sunset.

Don’t jump in just yet…

With FileMaker Pro: there’s some good stuff in this update but we’re seeing some user experience issues, including images in container fields distorting, slowness switching between screens, and some other small issues being reported. We reckon it’s probably better to wait til the first “point update” which usually follows fairly soon after a release in which Claris will likely address these issues.

For FileMaker Server: we’re keen to embrace the updates but we advise a cautious approach to updating your FileMaker Servers so suggest holding off for a short period: we’re switching some of our servers over to 19 right away, and will offer advice later in June on making the upgrade if all is going well.