As the sales guy, I spread the myth that the developer sorts are just geeks, who at the whiff of fresh air or sunlight head back inside to keep coding.

On the contrary though, at Digital Fusion there’s an underbelly of rebel runners and none more so than the godfather, Stephen Baker.

To sum up Steve, some say he runs more kilometres in a day than he speaks words. If you follow him on Strava you will see that pretty much everyday he’s out there pounding the pavement. With 10 Marathons already under his belt it’s fair to say he’s truly a master of the marathon.

In the Apprentice corner you find myself, having run a couple of half marathons and the full once, albeit very slowly. But around six months ago, this was all about to change with the apprentice signed up to take on the master, namely both of us running the Queenstown Marathon.

The apprentice decided that to conquer the beast would take skill, resolve, and someone else telling him what to do. I enlisted the help of two coaches based out of Sydney and got to work.

From a shocking first five km run, I gradually pulled myself up to some level of fitness. Six months is a long time to keep running, particularly when you have a coach tracking everything you do. Keeping yourself honest is one thing; keeping a coach happy is another altogether.

Well after much training and getting up to the ridiculous level of running 35km’s (in the rain no less), the time was ripe to dethrone the master. But….

Three weeks out I pulled up lame, having blown my right calf muscle. Many physio appointments later it was decided that there was no way the calf could withstand a four hour run so I sadly withdrew my entry from the marathon. The folk that run the Queenstown Marathon kindly offered to downgrade me to the 10km which I thought would at least be a nice walk around the lakes of Queenstown.

The master had shown the apprentice that it was indeed a marathon and not a sprint.

So come last Saturday, the two of us made the trek down to Central Otago, donned our Team DF running kit, and set out on our respective runs through the stunning Queenstown scenery, along with close to 10,000 other runners!

From my perspective, I started on the basis that if I could feel my calf hurting I would pull up and walk the remainder of the event. Fortunately there was no pain and I managed to run the whole way, in what was quickly becoming a very warm day.

Steve set out on the marathon around 8am and word got out fairly early that Queenstown wasn’t going to be offering up any “personal bests”. At 26°C and no wind at 9am, there were plenty of people struggling. The good news was the Steve finished the event and retained his rightful title of DF’s Master of Marathons, knocking off his 11th Marathon in a respectable time.

All up the event was awesome, in quite possibly the most beautiful place in the world. I think the master and the apprentice both have unfinished business so this blog post might need a little updating in 12 months. 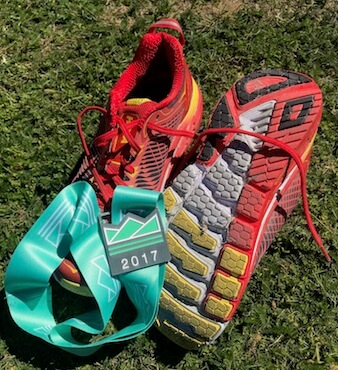 Editors note: As you’ll note in the photo of Stu, seen zooming past other runners, he nailed the 10k run, finishing 8th in his class. Well done both of you — you’re an inspiration to the rest of us.