You may be familiar with the Sort Records dialog in FileMaker which allows you to display records sorted by one or more fields. What you may be less familiar with is the ability to more explicitly define a sort order with the assistance of a value list. This article gives an introduction to this often overlooked feature, and provides a few examples along the way.

Sorting of records in FileMaker is achieved using the Sort Records dialog.

The dialog is available via Sort->Records in the file menu, and as a script step. You can also sort records by right-clicking while in browse mode somewhere on the layout, and choosing "Sort Records". The shortcut key ctrl+S (command+S on mac) will also bring up the sort dialog.

Move fields from the left side to the right side in order to sort by those fields. You can choose to sort by one or more fields, in either ascending or descending order. For most cases this is enough, and these sort options give you what you want.

There are however some situations where you wish to sort by a field, but the resulting sort is not what you want. This occurs when the sort order is to be custom, and not alphabetical.

An example of this situation may be sorting records by month name. If you were to simply sort your records by the month name, the resulting order would be:

Months are being sorted alphabetically, which is meaningless as a sort order. Ideally your sort order should be in correct chronological order, so how is this achieved?

The answer is to use the Custom Order Based on Value List option that is available when sorting: 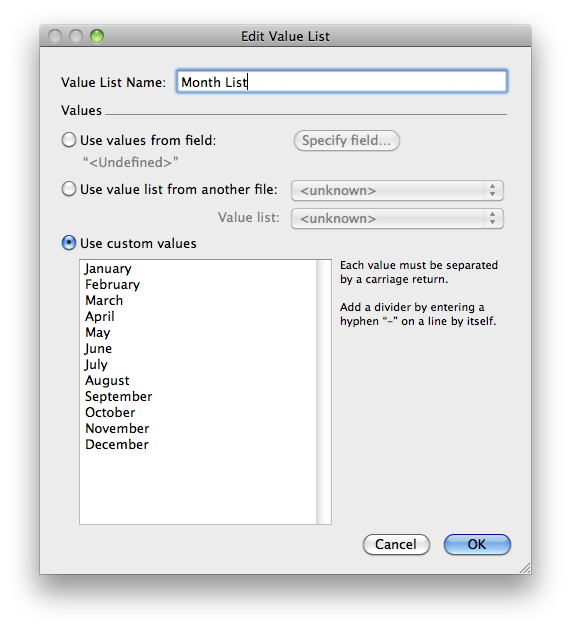 The value list is setup as a custom value list, and in the correct chronological order. It is this order that the record sort will use. Any matching value found in our sort field will be placed in the order as specified by the value list.

An Important Thing to Note Here:

This method of reordering sorted records based on a value list is most suited when using a custom values value list. When using this option, you can specify the exact order you want, and the value list will retain your order.

As always there is a downside - you must explicitly define these values within the value list itself, meaning the value list contents cannot be stored in a field. However, in most situations this is acceptable. For example, the months case is fine because there are only ever 12 months, and their order never changes.

Back to the Example - Sorting Job Statuses

For this example I have constructed a simple database containing 10 jobs. Each job has some basic details such as customer, date raised, month raised, job status and priority.

In this solution, I wish for the user to be able to sort jobs by their status. Job statuses however have a very specific order to them - not alphabetical. The status order of jobs has been defined earlier by the owner of this database to be:

No problem! All that is required is to construct a value list of job statuses in that order. In fact, it is very likely that the value list would already exist as a method for selecting a jobs status.

You will note that a sort field has a little icon that appears beside it. The icon is either the standard for ascending or descending order. However if you choose a custom order, the icon appears different:

This icon indicates that a custom sort order has been used that is neither ascending nor descending.

As you can see in the above picture, the records have been sorted by job status, and are now displayed not in alphabetical order, but a custom defined order as specified by the value list.

Up until this point, when we have reordered our sort by value list, the exact order of the value list itself has been used.

Jobs also have a job priority. A jobs priority from lowest to highest is:

A value list has been set up of job priorities in this order, and has been used elsewhere in the solution as the value list used when selecting a jobs status. It is in this order because from a data-entry perspective, the user of this database has requested it from lowest to highest.

Here is the sort order defined for this example. Records are sorted by job priority, and the custom order based on value list has been used. 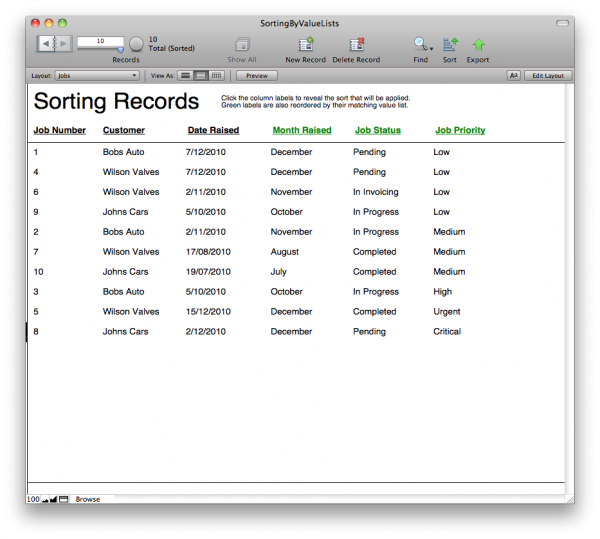 The jobs are sorted however from lowest priority to highest, which is not what we want, but is what we would expect given the order of the value list.

The only way to achieve the opposite order is to create a new value list of job priorities in reverse order, and reorder using that list instead. The Sort dialog does not allow you to order by value list in that value lists reversed order. 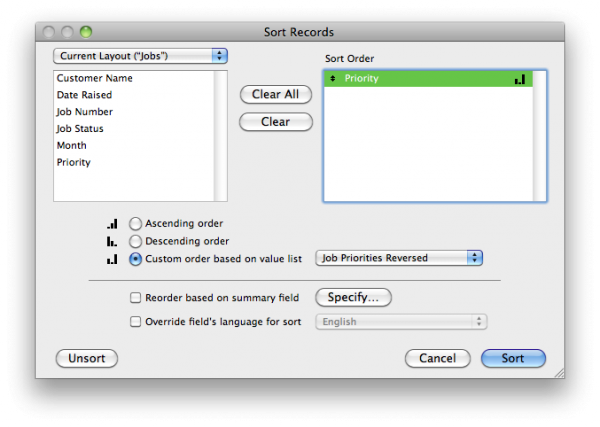 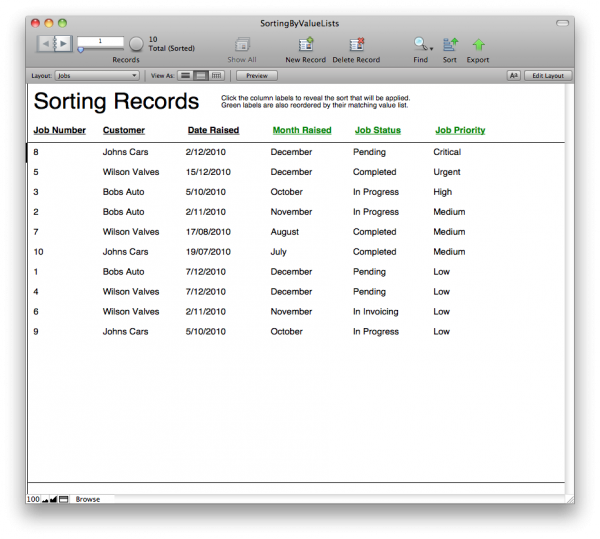 You can extend this further to have a sort which uses more than one sort order, and have each use a custom order. 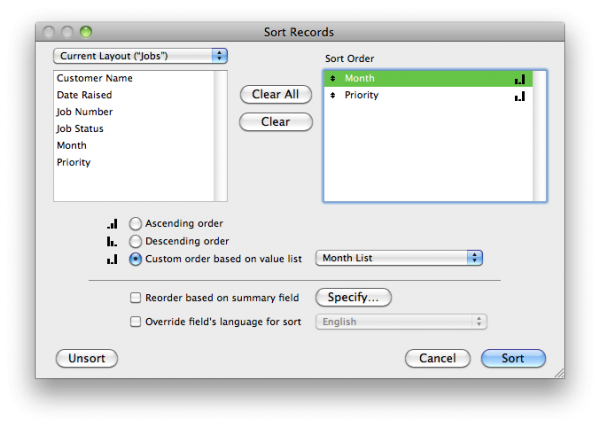 Looking at the months first, you can see they are sorted in chronological order from July thru December. Within each month, the jobs are then sorted by priority from highest to lowest. Looking at December as an example jobs are shown from Critical thru Urgent thru to Low.

Not Just for Sorting Records on a Layout:

The option to reorder based on a value list is available wherever records can be sorted, this extends to:

In these three situations, the reorder option behaves just like as described in the article.

The option to reorder by value list is an often overlooked sort feature, but a very powerful one. It excels when the field(s) being sorted contain relatively few possible values, such as month names, statuses or priorities. The reason being that a custom value list must be used, where explicitly entered values are put directly into the value list. This method would not work quite as well if the field contained many hundred possible values - unless you decided to create a value list containing every possible value in its correct order!

Please find attached an example file. This file was used for all the screenshots in this article, and is provided to help you fully understand what is going on in this article.