The 2017 FileMaker DevCon was held in Phoenix Arizona, a few hundred miles inland from Los Angeles, where flights from NZ land, so rather than catch another flight I figured a drive would be more interesting…

I’ve always been a “petrol head”, I love cars, driving and high performance engines, but now the with the rise of the electric vehicle I have a new perspective on things…

It has occurred to me that the internal combustion engine really is a kludge — a work around, an extremely complex, highly refined, remarkably engineered work-around to convert explosions into motive power. To see what I mean think about the systems that a petrol engine needs to work successfully: fuel, lubrication, cooling, transmission, exhaust, crank and electrical. In fact you have to have an electric motor just to get things started.

The modern combustion engine is a marvel to behold, an engineering and manufacturing triumph, but wow is it complex! 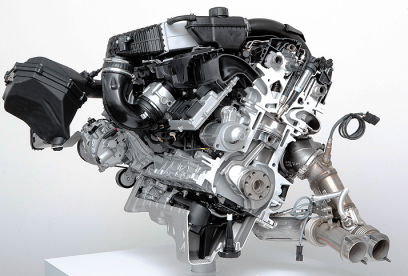 The electric motor on the other hand is dead simple. Some magnets and coils of wire, feed in an electric current and you get rotational motion.

So I believe the days of combustion engines — for main stream transport anyway, are numbered. We already have viable electric cars that perform well — fantastically well in fact — and can achieve a decent range between charges… there’s the rub though, with charging taking up to several hours. So petrol engines still have that ace up their sleeves — the 5 minute “recharge”. But when you factor in the advances coming in batteries and charging… in a few years those issues will be gone: range will double or better and much faster charging rates look like being possible. In fact I think battery technology is like the silicon chip: it’s probably the key driver of much of the technological innovation we see now — they’re everywhere, enabling devices and sensors to pervade our lives, whether we like it or not.

So that brings me to some real questions: When do you switch? How good are the best electric cars now? And what is it like to have to recharge your car on a road trip?

I figured the best way to find out for myself would be a road trip — a pretty decent trip, not just some city driving and a quick blast through the hills, but an 1300 kilometre return trip from LA to Phoenix in a Tesla Model X. Through a scorching desert where you will die if stranded. Or if the aircon stops.

First problem: how do you hire one?

A quick check of the mainstream rental companies revealed… nothing. But then a web search revealed Turo, a new way of renting cars from private individuals — essentially this is AirBnB for cars, and the result is a huge variety of vehicles including some very exotic and unusual options…

Signing up for Turo, uploading my NZ drivers license and getting ready to hire was a breeze — a hell of a lot easier than signing up with any of the old school rental companies, that is for sure. I can see yet another big industry disruption going down here — watch out car rental companies.

So I found a very nice 2016 Tesla Model X 90D. The choices available meant I could even find a colour and interior combo I liked, complete with the rather unique 6 seat configuration. Sweet!

To use the language of our industry, what was the User Experience (UX) like? i.e. What was it like to drive?

Quite simply the Model X is a beautiful machine to drive, with strong acceleration even at higher highway speeds (80-90 mph) and power that is instant and smooth. And it steers and handles with precision and confidence — our driving was city streets and freeways, but I’m betting it would’ve felt sublime carving out some twisty back roads too (i.e. New Zealand).

It’s true, there is no visceral V8 tearing apart the airwaves like my M3 but… it just doesn’t matter. I think until you’ve experienced it you can’t really understand this. Don't get me wrong the sound of the M3 is just fantastic, but the Tesla doesn't lack for not having it — in the same way petrol cars didn't need the sound of hooves, electric cars just don't need to roar.

So it turns out that heading out into that lovely scorching desert with limited range and big distances between chargers might’ve been slightly foolhardy, at least for the inexperienced EV driver.

The trip computer calculates your journey nicely — all you do is put in the destination and it tells you exactly where you’ll need to stop and how long for. It worked out the journey with a couple of stops of about 40 minutes, even though the journey could theoretically be done in one stop — that’s because the Superchargers “fill up” better for the first 3/4 of the battery capacity so it’s not worth waiting for a complete top up.

HOWEVER, if you leave with ‘just the right amount’ and then drive this car with any sort of vigor you will find that the range you thought you had, rapidly disappears. This can be a problem.

Tesla has your back though, and it’ll start pointing this fact out: “Stay below 70 mph to get to your destination” … at first I didn’t take that too seriously, I could see that the battery range was still greater than the distance left…

However continuing to drive briskly and with some incline or altitude or heat, or maybe a combination of all of the above, led to “Stay below 65 mph”. This brought on a fair dose of Range Anxiety.

I slowed down, moved to the slow lane and watched the big rigs I'd passed earlier haul ass on the Model X. Argh.

Pulling in to Quartzite, small town in the middle of the desert, things were getting pretty marginal and life support systems were on the verge of shutdown. Dire:

My passenger, fellow FileMaker developer CJ from LA, came with the bright idea that we install an exercycle in the passenger footwell to generate some extra power. Fortunately Quartzite has a Tesla Super Charging station.

On arrival at the JW Marriott Desert Ridge Resort in Phoenix, the Tesla was again down to the last few miles so my first question to the bellhop was “What are your charging options?”, to which he replied “$29 for valet…” — “Er, no mate. I mean electricity, where can I plug in?” The answer I was surprised to learn was “no where”. At least not at the hotel. Turns out that’s a bit of a problem…

Over the next few days I had to take the Tesla over the road to the shopping mall (which is about a kilometer away) and plug it in. The first place I took it to charged $1.50 an hour, which seemed OK, though I didn’t realise it went up to $5/hour after the first 3 hours, so I ran up a $20 bill and only half filled the car — the shopping mall chargers are way way slower than the Tesla Super Charger stations.

I found another charger a bit further down the road at another shopping mall car park — this time free, but with a 3 hour limit. So over the next 3 days I took the car there several times and gradually built up a decent charge. This was painful. Especially the walk back to the Marriott in that 40°C (104°F) plus heat.

Not being able to charge overnight at your destination is a killer. If we’d needed to go any distance each day, say a trip to Sedona or the Grand Canyon we’d be SOL. The nearest Tesla Super Charger was about 40 minutes away on the other side of Phoenix so a visit there was out of the questions too. I have to say that I was very surprised that a top notch hotel like the JW Marriott wasn’t equipped for electric vehicles. In fact the bellhop said they’d had 5 Teslas arrive that day alone! So what did those drivers do for charging I wonder?

Somehow I failed to learn from my journey out to Phoenix and on the way back I made the same mistake charging up to just the minimum amount of time recommended. After gather just enough electrons I then proceeded to nail it up the on-ramp and we headed briskly down the freeway. Within about 20 minutes the car came up with some bad news: You do not have enough charge to reach your destination.” WTF? This was a bit concerning because rather than needing to drive slower to get to the destination at Coachella, we simply were not going to make it. Basically it was telling us we were screwed.

After a quick team discussion we figured that we didn’t need to turn back yet — we hadn’t reached a point of no return — so we’d try a bit of Daniel’s cycling expertise and tucked in behind a truck to draft along at a modest speed for a while. I’d also figured out how to make the autopilot follow closely to maximise the draft effect (knowing that the autopilot would brake quickly enough if need be!) 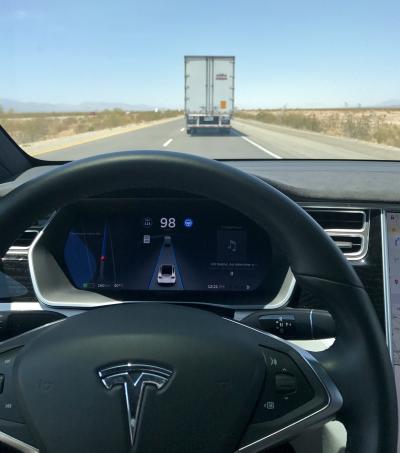 Arriving into LA at 5 PM on a Friday afternoon was always bound to involve a spot of commuter traffic. Turns out autopilot is very handy in this situation, bringing the car to a complete stop then driving off with the cars in front, even if you’ve dozed off in the meantime — saves a lot of embarrassment. Just kidding, but actually it was good as long as you didn’t want to change lanes — to carve your way through traffic, such as you might want to do when you’re running late to get to the airport, you really need to take charge and drive it yourself.

So… Would I Buy One?

Yes I would but I don’t quite think they’re for everyone yet: the Tesla range are still very expensive cars and there desperately needs to be either a very quick way to charge or charging points everywhere you might stop for the night. My problem is that I just can’t bring myself to part with the M3 yet.