Tidy Records is a start up based in Alaska, USA, developing apps for the medical industry. Their aim is to automate the tasks that are typically paper based, into well thought out and designed apps for use on PC’s, iPads and iPhones.

Randy Berlin approached Digital Fusion after reading one of our blog posts on turning FileMaker Go apps into standalone apps.

He had developed an app using FileMaker Go to record and track the sterilization information of medical equipment.

What he needed a hand with was turning this into a standalone app that he could market and sell to medical institutions around the world.

With experience in the FileMaker iOS SDK (software development kit), Digital Fusion was able to take the Go app and turn it into something that had similar qualities to a native iOS app.

The benefits of this are:

Plus the big advantage that it opens up a wide array of different ways that the app can be distributed... including the Apple App Store.

And A Quick Facelift

And finally, we thought the app needed a facelift. We took what was a standard FileMaker looking app and turned it into something more visually appealing, with a better user experience. 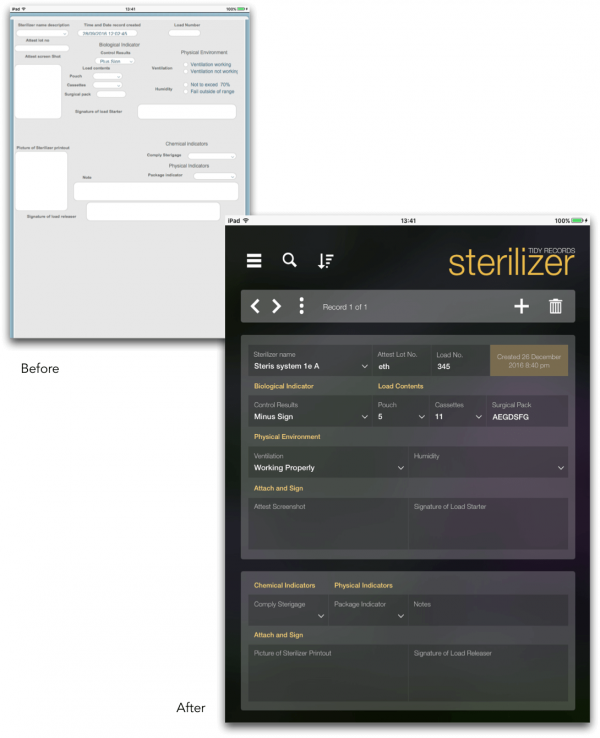 And Not Forgetting Safety

One of the other hurdles to get over was around backups. As this is not initially connected to a server, there is the ability to lose data if something happens to the iOS device. Digital Fusion came up with the solution that a single email with a *.PDF attachment will resolve any concerns around the loss of data. The pdf appears like a screenshot of your app.

All up the app now looks and performs completely different to where we started the journey. The proof will now be how it performs when it is sold to medical facilities, we can only imagine they will love it.

Things have taken a step forward since the original client story was told.